Last night we experienced a phenomena that last occurred thirty-three years ago.  The moon was a super moon and was closest to the earth in its oblong orbit.  The eclipse was the last in a series of four eclipse that spanned two years.  This unusual event can happen as often as twice in a century or it can skip a few centuries.  It is often called a Blood Moon due to the red orange color it becomes when it is in the Earth’s shadow.  Some religious leaders believe that the tetrad or occurrence of four eclipse within two years signals an event is going to occur that will change the world forever.  They point to several Biblical prophecies that state that the “moon will be turned to blood” in the end time.

Irvin Baxter who runs End-time Ministries in Plano, Texas notes that, “…Previous tetrads have had stark consequences for Jewish people.  The Spanish Inquisition took place before the tetrad of 1493-94.  The tetrad of 1949-50 occurred just after the founding of Israel.  The tetrad of 1967-1968 occurred as the Six Day War was fought in Jerusalem.”

John Hagee of John Hagee Ministries is on record since 2008 in saying the current tetrad signals major change.

NASA says not to worry about the current Blood Moon phenomenon as they know of no comet or asteroid currently on a collision course with Earth. 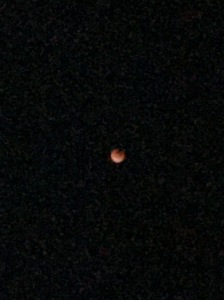 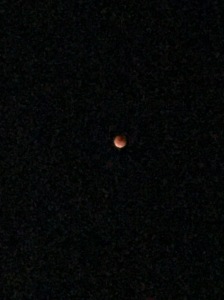 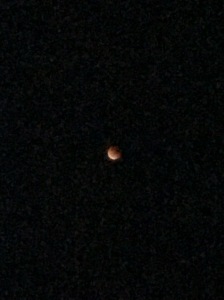 I can say that it was fascinating to observe.  A cosmological occurrence like the eclipse last night once again assures humanity that we are very small in an extremely large, complex, beautiful, and mysterious universe.  Yet, although we are small we have the ability to contemplate our position, place, and mission in something so much greater than us.

It was with great excitement and some fear that our family visited the storied city of New York fifteen years ago.  We called it our Great Eastern Vacation…and indeed at that time in our lives it was probably the most ambitious  journey that we had embarked upon accept for our Great Western Vacation, but that is for another blog.  One of the first things that I noticed was that traffic on the streets of Manhattan did not seem to follow any particular recognized rules of the road.  Car horns were honking  constantly…many times at me…and virtually all of my fellow drivers were either taxis, limos, police cruisers, or buses.  Many of the taxis appeared to be especially beat-up.  As I was attempting to park in front of a hotel, to check on reservation availability, a limo driver jumped out of his vehicle and began to vehemently curse the car just in front of me that had taken his perceived parking spot.  Whereupon the angry chauffeur then saw a friend of his and suddenly ceased cursing and greeted him warmly.  Mary Jane hurried into a Days Inn, the third hotel we had sought reservations at, while I tentatively waited with Aaron and Jonathon.  When she returned to tell me that we had reservations for the night but that the price went up June the first…I responded that whatever the price we must book the room for the second night and get off the road before we had an automobile accident.

The unusual sights and sounds of the city were almost overwhelming to our rural eyes.  Staying near Times Square and Broadway we traversed the evening streets and I was struck by the empirical fact that all of the major television news networks were within a few blocks of each other.  We passed many homeless and one poor soul who had a sign around his neck that stated people could curse him for a dollar.

Just the noise of the fire trucks and the crush of humanity below our hotel window was a sensory experience unlike anything in the mid-west.  Frank Sinatra sang that he wanted to wake up in the city that never sleeps…and I finally realized what he meant.  The excitement of being at the nexus of the financial and entertainment world in the United States was a strange and compelling elixir.

We attended our first Broadway show, “Taller than a Dwarf” with Matthew Broderick and Parker Posey.  As we sat just a few rows back from the front I looked to my right and there was Leonard Nimoy setting in the row adjacent to mine on the other side of the aisle.  As we walked back to our hotel after the conclusion of a wonderful production, although it seemed the critics did not agree, either Aaron or Jonathon exclaimed that Kevin Bacon and his wife Kyra Sedgwick had just walked passed us.  Low and behold it was the famous couple and so we did what country people do and stared from a distance at them.  As more tourists noticed who they were they quickly hailed a taxi and departed the area.

June 1, ‘2000’ was our bus tour of New York with the highlight being a tour of the World Trade Center. We toured the South Tower.  I noticed that I felt strangely uneasy the entire time that I was in the tower.  I had no idea why and usually I am not given to feelings of trepidation.  One year and three months and ten days later…the horrific tragedy of 9-11 occurred.  We all wondered if the tour that we had taken just a short time before was in the South Tower that sad morning.  We also thought of the many employees that we had seen and encountered and knew that certainly many of them lost their lives in the horrific tragedy. 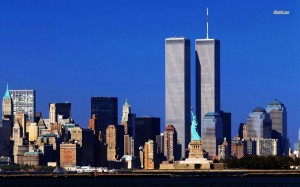 Where have all the Statesmen Gone

As I watched the Republican candidates for President debate last night I could not help but wonder, where have all the Statesmen gone.  The posturing, preening, and pandering of the majority of the unwieldy group would be somewhat entertaining if you were watching a comic movie…but quickly becomes frightening when the reality is that one of the narcissistic cadre will be the Republican candidate for President of the United States.  How has our great nation lowered it’s aspirations for the preeminent elected leader of our country to the basement level of applauding bigotry and misogyny as admired speech in the spirit of the candidate being bold and saying what he thinks?  How is it that a candidate breaking unions and putting thousands of workers on the street or forcing members of the working middle class, which is the backbone of our country, into minimum wage jobs… progressive policies and courageous leadership?

As we all know from our ninth grade civics class our government is designed by our founding fathers to be shared power.  The writers of our constitution did not want another king.  Thus they designed political decision making to be collaborative or a compromise system.  There is supposed to be a middle ground that statesmen and stateswomen can agree together for the good of our collective endeavor where each side gain some of their initiatives and loose others or modify them.

A prime example of dysfunction in government is our current Illinois mess.  Although we are supposed to have a new budget July first we have yet to have even the outlines of an agreement.  Our local University, Southern Illinois University, fears massive layoffs and course reductions while much of state services are being mandated by the courts to be paid at last year’s spending levels…resulting in the very real possibility of an eight to twelve billions dollar deficit by the end of the fiscal year.  The deficit being compounded dramatically due to our new Governor Rauner’s allowing state taxes to be reduced costing the states coffers over five billion dollars.  This fiscal nightmare is magnified by the fact that Illinois was, with the additional taxes, three to five billions dollars in deficit.

It was announced a couple of days ago that since there is no budget the state will soon cease to pay all employees and retirees health, dental, and vision insurance claims that are state funded.  This places the price of our elected leaders intransigence and fiscal malfeasance squarely on the backs of the poor working class citizens of Illinois.

The late Senator Paul Simon of Illinois was a Statesman.  Toward the end of his life my wife and I were at a book signing whereupon he greeted us warmly and inquired as to how we were doing.  When Mary Jane, who had gone back to school and earned her masters degree at age 40, mentioned that she was looking for work commensurate with her recent Workforce Education masters degree he asked her to make an appointment with his assistant for him to talk with her in his office at Southern Illinois University, where he would see if could help her.  Now let me say that we did not know the Senator other than he being a member as we were of the SIU community nor had we worked in one of his campaigns or donated any money to his political causes.  Senator Simon had been out of politics for several years and had become the Director of the Public Policy Institute at SIU.  This Statesman was respected on both sides of the aisle during his years in the Senate and at his funeral both Senator Edward Kennedy and Senator Alan Simpson spoke eloquently regarding Paul Simon’s political skills and his love for humanity.

Speaking your mind and the courage of convictions is indeed important in politics and as a mark of a strong leader.  President Ronald Reagan told Soviet Premier Gorbachev to, “Tear down this Wall,” and something great occurred that benefited humanity.  President Lyndon Johnson spoke his mind and the Civil Rights Bill of 1964 became the law of the land and we all our better for it.  Dr. Martin Luther King had a Dream…and was spat upon…and jailed…and killed…and he changed our world for the better.

Let each of us as voters…and the people responsible for our lawmakers and Chief Executive ponder our responsibility to obtain the leadership that we deserve.