It was during the latter part of last September that Mary Jane mentioned to me that she had found an extraordinary price for a western Caribbean cruise in January.  When we were still working colleagues had admonished me that once I retired I would be happily available for the rock bottom low cruise prices that appear suddenly and have to be utilized by people who have virtually no commitments that burdens their calendars.  Although we have been faithfully looking over the past four years of being foot loose and fancy free…we have not seen that many offers that have caused us to drop everything and jump on board.  The cruise aboard the Emerald Princess disembarking from Houston, Texas and stopping in Roatan, Honduras, Belize, and Cozumel was the wonderful deal that we had been waiting on.

As we arrived in Houston Saturday afternoon, to be certain on being on time for our Sunday afternoon boarding, we noticed how chilly, rainy, and cloudy it was.  Although it was in the forties the Houstonians that we met expressed that they were darn cold!  After a flawless bus ride to the ship we boarded early with no problem.  I could not help but notice the enormity of the vessel, it holds over three thousand passengers, and it is one of the largest in the Princess fleet.  We leisurely toured the stunning ship and were more than ready for the obligatory safety drill prior to setting sail.  As the time for our sail away came and went we suddenly were informed by our Captain that due to fog the Galveston channel had been closed by the Harbor Master.  The Captain went on to estimate that we probably would not be underway before 4am Monday morning.  The fog did not lift until mid morning and we set sail finally at 10am.  Due to the seventeen hour delay, Roatan, Honduras was replaced with Costa Maya, Mexico.

Cozumel was our favorite port.  This lovely island is distinguished by its exquisite beaches and the beautiful crystal clear azure blue water that surround it.  Cozumel is known for its black corral which the residents dive for and subsequently fashion into rare jewelry.  The island’s residents are Mayan.  Our tour guide took us to a small Mayan Ruin that had an original entrance door of no more than four feet hight.  He told us that the original Mayan people were very short but that the Mayans we saw on Cozumel now looked very different due to interbreeding with the Spanish.  He went on to expound on how cold it was and that we were visiting them during their winter.  Although the temperature was 75 to 80 degrees he said that many of the children in the poorer section of the island were coughing and sneezing with colds due to the low temperatures.  During summer our guide told us that most Cozumel residents slept in hammocks very near a fan as the temperatures can be one hundred and fifteen degrees.  Hotel rooms during the winter run $190.00 per night and are booked solid while during the summer the cost falls to $90.00 per room per night.  During our boat tour around the island I counted seven cruise liners in port…while during the summer they have only one per day. 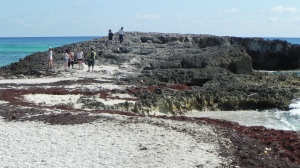 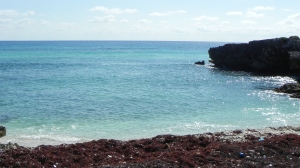 These are scenes from the beautiful rocky shore lines of Cozumel. 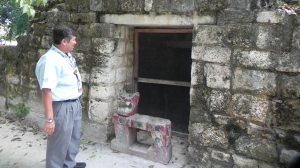 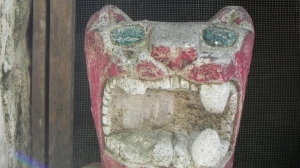 Our guide illustrating how low the original door was into the Mayan Ruin.

I was struck with the dignity and easy manner of our guide.  He recounted the original physical strength of his ancestors by talking about his grandfather who is ninety-five years old and still farming.  He mentioned that his grandfather does not need glasses to read the paper while he, our guide does.  He went on to say that when his grandfather comes in from the fields for the day that his wife not only takes his shoes off but goes on to undress and bathe him.

The more that I travel the more I am convinced of the rich diversity of people who inhabit our planet…and I wonder why do we continually fight each other during our short journey together.

As I mentioned in my last post our recent visit to Hawaii afforded us, due to my brother-in-laws careful planning, a beach house directly on the beach.  I could not believe our good fortune when it was apparent that the Pacific ocean would serenade us for our entire visit.  Two elements of nature fascinate me and they are large bodies of water and the sun and how the sun interacts with the water.  I simply do not become weary of watching both.

There is something mesmerizing about the vastness, movement, and majestic splendor of the ocean.  During our week-long adventure we were able to visit many points on the island of Oahu with the three ocean picture settings of; the north shore, which is noted for it’s extremely large waves and rocky shore, Ewa beach, which provided me with a limitless number of digital photos, and finally Waikiki beach.  I remember my first camera which was a Big Swinger Polaroid camera that I received for Christmas when I was a boy and now marvel at the visual clarity and seemingly limitless photo taking opportunity of the current generation of digital cameras.  Photos are really a bit of magic in our all to fast-moving lives where we can for a moment stop time and remember where we have been. 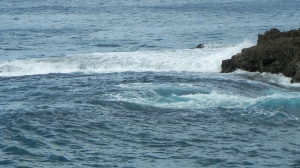 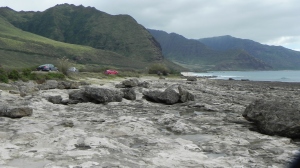 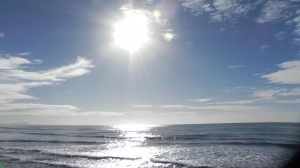 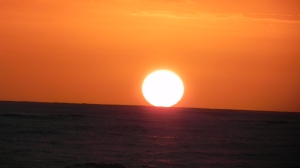 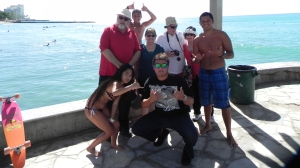 As 2014 draws to a close I hope that each of you enjoy good health and happiness.  Let us try to remember that the truly valuable things in our lives money did not buy.  Is God a capitalist…or would he like for us to learn a better way while we are sojourners on this beautiful Earth?